In preparation for (R)Evolution 2015 we caught up with Sally Jenkinson to ask her a few questions. What do you do, day-to-day? I work as […]

In preparation for (R)Evolution 2015 we caught up with Sally Jenkinson to ask her a few questions.

I work as a freelance consultant and solutions architect – helping to understand people’s problems and needs, to turn those into solutions, and to explain any impacts in a way that is easily understood. It ranges from more specific technical architecture and integration projects, right through to higher-level digital strategy, process improvements, and transformation work. I often sit in between UX, business, and technical people, and work with everyone from little start-ups to clients including a college, a big travel company, an energy company, and a well-known bank.

My first job in the industry was a placement year in the third year of my degree. I realised that I’d learnt much more by actually doing the job than I had on my ‘Internet Computing’ course, so decided to drop out, get the paperwork of a degree with Open University, but to carry on working full time. Initially I was a generic ‘Developer’ back before we had dedicated front and back-end teams, but as trends shifted I focused on the back-end, moving through the ranks and eventually managing the development team.

I’d started going to a lot of client meetings, and got to work closely with some of their technical teams, which made me realise that I enjoyed asking questions about what was possible and shaping solutions together rather than just delivering. My focus became more architectural and discovery-led before I eventually moved into a role as Head of Technology. This was a mix of internal management, making sure the right solutions were being proposed, and undertaking technical consultancy, which was the bit that I really loved. I worked alongside a Strategy team of UX and data consultants as well as the developers, helping to understand what people needed and what the options were to make this happen.

After 8 years agency-side and a move across the country later, I thought I’d “freelance until I found the right next proper job”… 3 years into my freelancing, a Limited company, and turning down several brilliant “proper job” opportunities later, I’m not sure that will happen any time soon!

My talk for the conference touches on this a little bit. I think that the evolution of technology and the web in general is fascinating, as it’s a mixture of planned and ‘natural’ evolution; the expected and unexpected. I love that no matter how you think something may be used, there will always be a great example of something else that you never predicted.

The web is all about evolution and it never really stands still, which can mean that things can be tricky – both in terms of our projects and keeping up as individuals. In that sense the future can seem quite daunting, but it can also bring lots of opportunities if you’re in a place where you’re ready and able to embrace it.

More predictions about what will be hot in 2016 😉

I’m sure there will be the usual gadget lust/bashing when 2016’s latest Must Have thing comes out, and lots of chatter around how that impacts on creating for the web. I’m interested to see where concepts like wearables go now the Watch is well and truly out there – for me personally it still seems like a bit of a halfway house, and that we’re still too tied to traditional form.

A lot of the big discussions that we’ve had in recent years haven’t been entirely new, only amplified by context and events. The progressive enhancement chat, apps vs web, and whether UX/responsive/performance are killing design will all likely stick around for a while longer yet, but what I’d like to see is more discussion around the impact of the choices that we make when designing and building, and people sharing more about their decision making processes.

Being freelance and working with lots of different people, I’m still amazed at how little work-life balance many of them have, and it’s this that I’d change. That’s not a problem exclusive to our industry, but it’s something that many places still do incredibly badly, and it’s a very damaging mentality for newcomers to be indoctrinated into.

It’s not a single project, but of all time, I still look back most fondly on my work over the years as lead developer on projects for Electronic Arts. My first one was the Battlefield 2 site, and I think I worked on almost 20 other game title projects for them, which was brilliant not only because I’m a huge gamer, but because of the great relationship that we built up and the technical challenges that I got to play with.

I was working with a lot of in-game data, asking a lot of “could we do this instead..?” questions with regards to the APIs, and got to make tools that required lots of creative custom coding. I worked on a Flash site for Harry Potter and the Order of the Phoenix with puzzles where the environment changed based on wand gestures, on several FIFA sites where we combined in-game and real Opta data, made a companion site for Burnout Paradise, and won some nice awards for Spore where we not only pulled out a massive amount of statistical data, but could recreate user-generated characters, allow people to grab PNGs, and import them directly into their game where they would then be fully editable. And then there was the incredibly simple brochure site for Mass Effect(s) and Dragon Age(s) which were amazing to work on simply because I love both titles.

Since I’ve gone freelance, I’m probably most proud of the direct consultancy work I have been doing with Inghams and their sister companies, because it spans technology, process improvements, lots of user experience work, and skiing!

I grew up in South East Asia and I’d love to do some work to give me an excuse to head to Singapore or Japan for a while. As you can see from my excited response above, I’d also absolutely love to get back into the gaming industry and to work on tie-ins between games and their online experiences. If anyone’s reading this wants to hire me to do exciting things, get in touch! 😉

This is a pretty impossible question! I don’t think I can pick just one. My earliest memory of sci-fi was being shown the 1989 spoof film Lobster Man From Mars, which as a 5ish year old I found terrifying, but it didn’t put me off. I grew up on Star Wars, Flash Gordon, Superman, and all the classics (thanks, good parents), and my appetite for it has only grown over the years – I tried to deliberately read something other than sci-fi for a while earlier this year, but that resolve didn’t last long.

There is something about the 20th Century Fox sequence that makes me sing along every time, but I can’t be alone in that. Can I?

All these moments will be lost in time: the web, the future, and us

As web professionals we’re used to hearing about the virtues of shipping fast and iterating regularly in order to meet changing needs, but how do we ensure that the projects that we’re planning now are still as relevant and robust when they launch in the future… and beyond? How do we prepare for the unknowns and constant shifts in technology; what can we do to progress the evolution of the web itself; and how do we, as individuals, ensure that our skills are as relevant as ever in this rapidly changing world?

In this talk we’ll look at past visions of the future, what we can learn from these lessons, and how to apply this in a practical sense to the work that we do.

You can see Sally’s talk at (R)Evolution on Friday 25th September at The Walker Theatre, Theatre Severn in Shrewsbury. 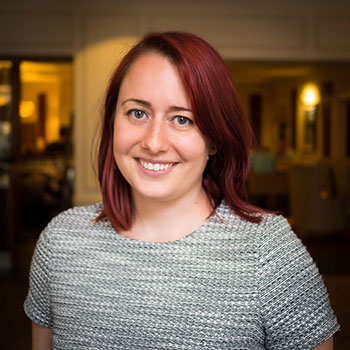