Seb does really awesome things with pixels. Nuff said! 🙂 In preparation for (R)Evolution 2015 we asked him a few questions. What do you do, […]

Seb does really awesome things with pixels. Nuff said! 🙂
In preparation for (R)Evolution 2015 we asked him a few questions.

I kinda fell into it. Which is a really dismissive and rather unhelpful answer coming from a position of huge privilege. But the long story is long, so maybe over drinks in Shropshire I’ll give you the full version.

PixelPyros. It was the first really big thing I did and people seem to really like it.

I don’t really find it very easy to work for anyone else any more – I’m too used to working for myself. I’m a hard taskmaster for sure but it’s such a great luxury to be only working on things that you want to work on.

Really enjoying Humans at the moment.

Do you have a guilty secret ritual when it comes to watching films i.e. watching old Doctor Who episodes from behind the sofa or only watching Star Trek while participating in drinking games (these are not my guilty secrets btw! ~ grin!

None that immediately come to mind!

Playing with code: Venturing into the unknown is scary, but fun things happen when you try new things. Seb will show you that it’s rewarding to get out of your comfort zone and blur the boundaries between artist and coder. He’ll be talking about his recent experiments with lasers for his digital fireworks display, PixelPyros, and of course, expect some dangerous live demos.

You can see Seb’s talk at (R)Evolution on Friday 25th September at The Walker Theatre, Theatre Severn in Shrewsbury. 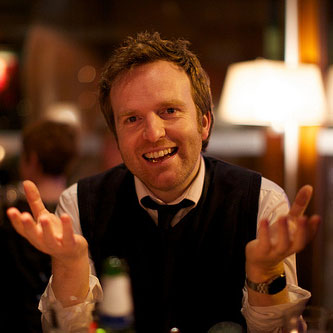