The beginning of March saw Shropgeek become a limited company. Hurrah! We are really VERY excited about this, because it is the beginning of a new era for us.

So why a limited company?

I’m going to be brutally honest here: it started off all about the money, but later become much more about the services my company was offering.

As explained on the about page, Shropgeek started life as a monthly social 6 years ago but now, we also host quarterly Rebellion events and our annual web conference, (R)Evolution. These events have bills to be paid, tickets to sell and usually sponsorship as well.

This wasn’t really an issue when (R)Evolution was an evening event that happened once a year, but as we stepped up the number of events we ran, this started to have a massive impact on my own business.

I think it’s been firmly established now that conference organisers do it for love and not to make a lot of money (kudos to Alex Older for his fantastic write-up of the costs involved for WDC). That’s definitely true of (R)Evolution. It turns out I absolutely love organising events for Shropgeek, but it takes up a lot of time and doesn’t turn over much of a profit.

Profitable or not, there was still a lot of money coming in and going out to pay for the conference. And the numbers go up with each new event we host. All of this went through the books for Kirsty Burgoine Ltd. So, while (R)Evolution was marketed as a Shropgeek product, technically, all Shropgeek events were actually products of Kirsty Burgoine Ltd.

This was starting to change the shape of my company. I’m a small business owner, and I love the flexibility that gives me, but Kirsty Burgoine Ltd. designs and builds bespoke websites and is not an events management company. Having Shropgeek as a technical product of Kirsty Burgoine Ltd started to change that – despite it being a project of love, and not creating much profit.

This is something I really wasn’t that happy about, and I didn’t feel that having Shropgeek set up as a sole trader was a better option either. So Zach and I chatted back and forth for about 6 months, on and off, about what the options were for making Shropgeek more official. I then discussed it with my accountant to make sure that what we decided was possible and ultimately we came to the decision to create Shropgeek the limited company.

There were a number of other options we could have chosen but this was what suited us. As the person that does most of the organising, I am the director of the company and as the co-founder Zach is still on board as a shareholder and actively involved in (R)Evolution.

So how does this affect Shropgeek regulars?

The short answer is, it doesn’t. Shropgeek is still a community of people in Shropshire, our ethos is still to provide fun, engaging events that have no pressure of networking. We have no agenda to get you all signed into a subscription based membership to be able to attend our events.

There are also no plans to change the format of the events we already run, the socials will still be once a month and free to attend, Rebellions and (R)Evolution will still go ahead.

The only real difference is that there is a more clearly defined core now to handle all of the money stuff, oh and the possibility of a bar tab from time to time at the socials, paid for by Shropgeek. Woohoo! ~ grin!

So what does this mean for Shropgeek?

What this means for us is, everything is much more clearly defined and out in the open. It also means that we can start to do so much more! Which is why this is so exciting. A number of different event ideas have been bandied around at the socials over the years and now we can start to do some of these.

We’re already starting by introducing a series of workshops (news on these to come really soon). We want to create and host events you want to attend so we’re always open to new suggestions. Some events will be free and some will have tickets.

I’m a big believer and supporter of grassroots events because it levels the playing field and makes it possible to share knowledge with everyone, not just those that can afford huge ticket prices. Some of the money from the paid events we run will go towards helping to make other events free to attend, to make sure as much of what we do is as accessible to as many of you as possible.

I’m not going to lie, it would be really nice if Shropgeek could generate enough income to pay those that work tirelessly behind the scenes something for the time they give up to make these events a success, but that is not as important as making the events a success to start with.

As a limited company we now have the freedom to do so much. It is a very exciting time! 🙂 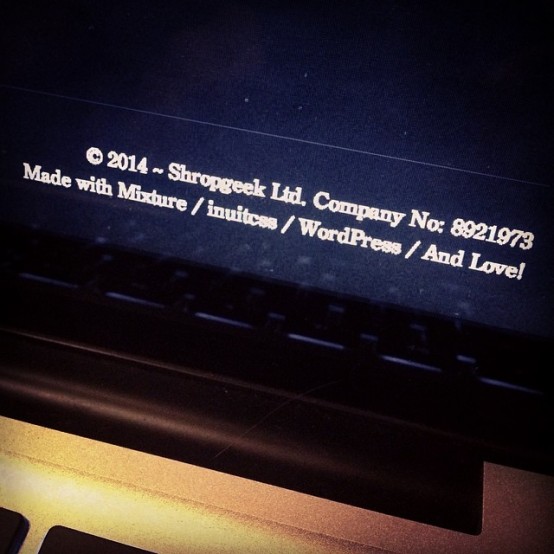