We all know Andy is a huge fan of Planet of the Apes but is that his favourite B-Movie / Sci-fi tv show or film? […]

We all know Andy is a huge fan of Planet of the Apes but is that his favourite B-Movie / Sci-fi tv show or film? In preparation for (R)Evolution 2015 we caught up with Andy Clarke to find out.

At Stuff & Nonsense, we’ve worked on several client projects that made me proud, so it’s hard to narrow them down to one. It might be our design for Disney Store UK ten years ago that was the first major web standards based and accessible e-commerce store. Then our work on the Hillsborough Independent Panel website played an important role in telling the true story of what happened at Hillsborough. It could be the thing that I’m most proud of isn’t a client project, it’s my Contract Killer open source contract that’s been used by many, many designers and developers.

If you listen to my Unfinished Business podcast, you’ll know that if I could work on anything away from the web, it would be conservation of great apes, particularly gorillas. I’ve been a supporter of WWF for many years and ‘adopting’ a gorilla has been a regular present for me at Christmas. So I could not be more pleased that we’ve just been commissioned by WWF UK to redesign their adoption and donation pages. It’s a wonderful creative challenge for something that I care deeply about.

Of course, me being the second biggest Planet Of The Apes fan in the UK, I could say Planet Of The Apes, but I love sci-fi in general and in particular, 1960’s radioactive creature and giant monster movies like ‘Tarantula,’ ‘Them’ and ‘20 Million Miles To Earth.’

Creativity Over Predictability: Our industry has matured into something that’s very different from the almost joyfully naive, creative designer’s playground that it was when I started. While we focus our thoughts onto processes, methods and mechanics, instead of ideas, we’re losing the creative ‘soul’ of our work. I’m hopeful that all’s not lost and that we can make work that’s memorable if we focus as much on creativity as we do on implementation.

You can see Andy’s talk at (R)Evolution on Friday 25th September at The Walker Theatre, Theatre Severn in Shrewsbury. 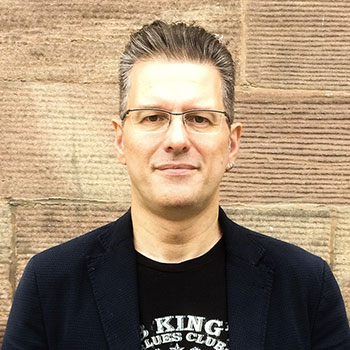