We are very excited to announce that tickets are now on sale for the (R)Evolution Conference, which is taking place on Friday 26 September 2014, […]

We are very excited to announce that tickets are now on sale for the (R)Evolution Conference, which is taking place on Friday 26 September 2014, at the Shropshire Conference Centre, Shrewsbury.

This will be the 5th (R)Evolution conference and once again, we have 8 of the web’s most revolutionary thinkers and space for 200 attendees. So whether you’re a web industry veteran or just starting your career, you won’t want to miss out on the chance to be part of one of the friendliest web conferences in the UK.

The lineup this year includes:

We are also looking for one more person to join this year’s line-up. If you think this should be you, then drop us an email at [email protected] before 12th May 2014 outlining your talk idea, and you could be up on that stage in September!

As well as the main conference, we will be putting on a Rebellion the night before to give you a flavour of what Shropgeek does all year round, and of course, our now famous (or should that be infamous!?!) after party will happen again at Romolo. This event really is not to be missed so book your tickets today: 2014.shropgeek-revolution.co.uk/tickets.html

And finally, we just wanted to say a huge thank you to Martin Wright for designing and developing our fab new website and Stina Jones for the awesome illustrations. Full details of the conference and fringe events can be found at: 2014.shropgeek-revolution.co.uk. 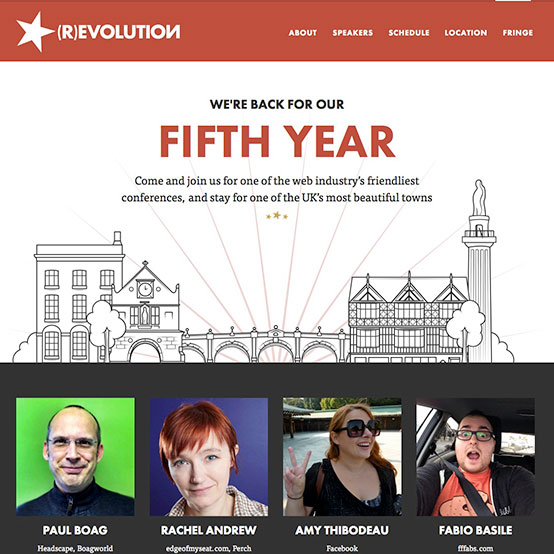