When planning for this year’s conference kicked off back in January, it was decided that we would take a break in 2016. So, we wanted […]

When planning for this year’s conference kicked off back in January, it was decided that we would take a break in 2016. So, we wanted this year to be BIG!

We made this decision simply because of the time and effort involved to organise a conference of this scale. Every one of us that has been involved over the years has done so because we love the event and the community it supports, but we also all have full time jobs and have to do this over evenings and weekends. Organising a conference is a full-time job on its own, so fitting it around everything else leaves little time for sleep!

So why the last (R)Evolution and not just a break then?

As part of the promotion for this years conference, I’ve been attending as many other conferences and meet ups as I can get to / afford, and one question that keeps coming up: “Why is this the last one?”.

Zach and I started (R)Evolution back in 2009 for a number of reasons.

Basically, we have done everything we set out to do.

This year, we will have paid tribute to Leu on a large scale for six years and will continue to do so in other ways.

There are now hundreds of meet ups and conferences happening all year round all over the country, which is awesome and means I no longer have to travel so much to be inspired and meet super talented people (although I still enjoy my trips to both London and Brighton) so, Hurrah!

And, I’d like to think that we have now proven that Shropshire has an amazingly AWESOME digital community doing really cool and creative things. 🙂

Oh, and it turns out I really do like sleep!

Through (R)Evolution, we have achieved so much. We’ve seen the ShropGeek community grow and flourish. People have found jobs, new people to collaborate with, met new friends, learnt about new technologies and techniques and enjoyed EPIC after parties. There isn’t really any way we can top that, so now seems the perfect time to draw it to a close instead of just taking a break.

It has been an amazing and really fun journey. Personally I’ve met so many awesome people and seen first-hand how ShropGeek has helped others. It is incredibly satisfying to know that I had a part to play in that.

Not a chance. This is not the end of ShropGeek. Our monthly meet ups will still happen on the first Friday. We will also still be hosting Rebellion – our evenings of talks.

It is only the full-day conference that we will no longer host. (R)Evolution may be back in 2017 in a different format or someone else may decide to organise a web conference to take its place. The possibilities are endless!

Over the years I’ve had a massive amount of help and support in organising these events and it wouldn’t be right not to thank everyone that has helped (if I miss anyone out please say!). So here goes…

All of our speakers over 6 years:

All of our sponsors:

And last but definitely not least, thank you to all of you guys. Without you (R)Evolution could never have happened! 🙂

Tickets for this year’s (R)Evolution Conference are available now – get yours here: 2015.shropgeek-revolution.co.uk 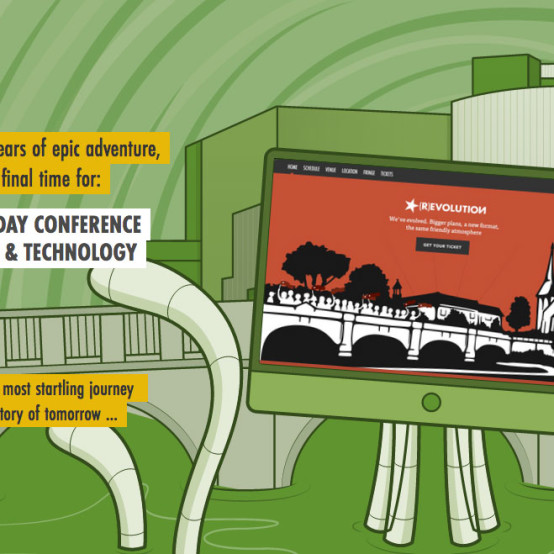